You are here: Home / FAA Field of Vision Requirements

a. The applicant should be seated 40 inches from the target.

b. An occluder should be placed over the applicants right eye.

c. The applicant should be instructed to keep the left eye focused on the fixation point.

d. The white test object should be moved from the outside border of the wall target toward the point of fixation on each of the eight 45-degree radials.

e. The result should be recorded on a worksheet as the number of inches from the fixation point at which the applicant first identifies the white target on each radial.

f. The test should be repeated with the applicants left eye occluded and the right eye focusing on the fixation point.

I.  A standard perimeter may be used in place of the above procedure. With this method, any significant deviation from normal field configuration will require evaluation by an ophthalmologist.

II.   Direct confrontation. This is the least acceptable alternative since this tests for peripheral vision and only grossly for field size and visual defects. The Examiner, standing in front of the applicant, has the applicant look at the examiner’s nose while advancing two moving fingers from slightly behind and to the side of the applicant in each of the four quadrants. Any significant deviation from normal requires ophthalmological evaluation.

If an applicant fails to identify the target in any presentation at a distance of less than 23 inches from the fixation point, an ophthalmologist’s evaluation must be obtained. 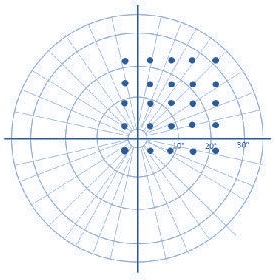 When the FAA has a concern about a pilot’s visual field vision they will usually ask for a Humphrey Visual Fields Test. There are a few different types of Humphrey Visual Field tests. The two most common are the Humphrey 30-2 and Humphrey 24-2. The “30” part of the name refers to the fact that this threshold exam tests the visual field extending out to 30 degrees from fixation. This is 30 degrees in all four directions, so it tests the central 60 degrees of the pilots’ visual field. This contrasts with the 24-2 and the 10-2, which obviously test the central 48 degrees and 20 degrees, respectively. The optic nerve is approximately 15 degrees nasal to the fovea, which is why the physiological blind spot, which we all have, does not appear on the 10-2, but does appear on the 24-2 and 30-2.

While the normal human visual field is widest horizontally there is an important consideration for those who fly under Sport Pilot or Basic Medical Rules. Some states require 120 degrees of horizontal field in order to obtain a drivers license. If you lose only 20% of your horizontal field, you could be in danger of failing a state driving test which is required for pilots operating under Sport Pilot and also those flying under Basic Medical Rule.

So, which field should a pilot take: 24-2 or 30-2? The FAA may prefer one test over another for different conditions or issues. Many studies have found testing unreliable due to fixation loss and older airman typically have more trouble with accuracy during visual field testing. The 30-2 obviously tests more points, but if you have difficulty providing reliable fields the 30-2 test may not be the best choice. In this situation the 30-2 may provide an extra 6 degrees of edge information but less reliability. Contact Pilot Medical Solutions at 405-787-0303 for support with this issue.